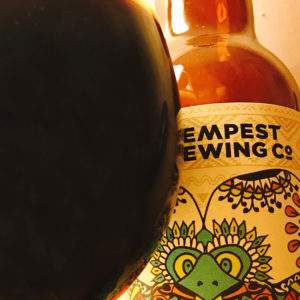 Mexicake is an Imperial Stout brewed with Cinnamon, vanilla, cocoa and chillies, and it is delicious.
The only thing that it isn’t is hot from the chillies.
Instead they provide a gentle prickle on your tongue as you drink.
Pouring an inky black, the beer smells of bitter chocolate and plum compote, its little bubbly head gripping the side of your glass as you drink.
There’s a deep rich malting that’s chewy and thick, packed with pumpernickel and malt loaf, honey, treacle and burned toast, and some crunchy red leaf litter, maple syrup and lemon zest from the hops, and all the while the vanilla adds a rich creaminess and the cocoa adds a powdery chocolate.
The only thing that lets the beer down is the chilli heat that is hardly visible.
Yes there’s a light spicy prickle, but it’s not enough for you to know that this has been brewed with chillies if you weren’t told that they were there.
And even so this is a marvellous Stout.
A marvellous Stout that could have been magical if the chilli had been a little more bold.