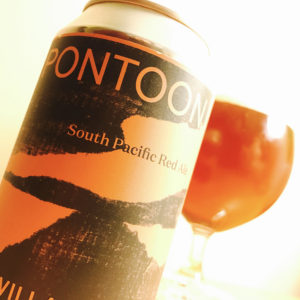 I was intrigued from the moment I saw this can.
You see, I have a lot of old records released by obscure little indie labels that have covers that look very much like the artwork on this can.
And Villages sounds like an indie band, and I mean “proper” indie meaning independent not “indie” meaning it has some guitars and sounds a bit like Travis or some such.
There’s something very pleasing to my personal sense of aesthetics about things that look lo-fi, homemade, like the photocopied fanzines I used to devour for musical information in my teens, the lo-if look reeks of passion and excitement.
At least it does to me.
And so I was very very pleased to find that the beer wrapped up inside this little can that looked so good tastes great.
Pontoon (another good indie band name) is a South Pacific Red Ale and its bursting with forest fruit, toffee and honey, bran flakes and Kiwi, passion fruit, lime and toffee.
It’s sticky and sweet, chewy and bitter, and it smells of flowers and lightly salted honey.
All in all it’s terrific and I struggled to decide which song to put up here with it, until I settled on something made in Deptford (where the brewery is based) that’s arguably one of the first true indie records as well as being a stone Punk classic.