A little while ago I wrote about BrewChap’s beautiful take on the Rainbow Project.
He’s finally finished the last two beers of the set of seven, and here they are. 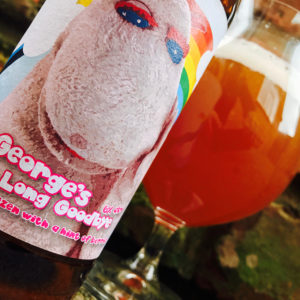 George’s Long Goodbye (6%) is a Hefeweizen with a hint of berries, and it’s absolutely delightful.
Pouring a cloudy gold with a frothy white head the beer smells of spicy bread dough and raspberries.
There’s a soft smooth body to the beery as you’d expect from the style, and lots of caramel and honey, pancakes and wafers which are rounded off by a light banana and earthy spice touch of yeast.
The hops are sharp and green and herbal, fresh and zingy, and the fruit – raspberries? Bilberries? – add a soft juiciness to the finish of this fab little beer. 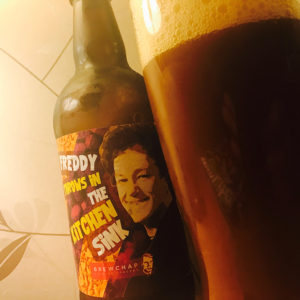 Freddy Throws In The Kitchen Sink (6%) is an Oatmeal Brown IPA, a beer brewed with all the stuff BrewChap had laying about.
But like a magician he makes it all work.
This is a chestnut brown beer with a big fuzzy cloud for a head and a smell that’s all toffee and Parma violets.
The oatmeal adds a smoothness to the body of the beer and there’s a good toffee and leather satchel malting and lots of metallic herbal leaves, satsuma and lime leaves from the hops.
The finish is sharp and slightly harsh and though this isn’t one of BrewChap’s best, it’s still better than so much of the beer you can buy in the shops.