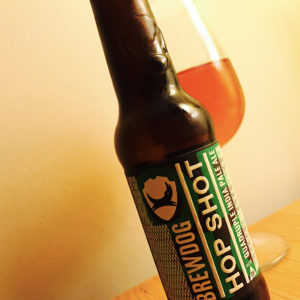 Ooh look, a little bottle of marketing.
BrewDog are starting to get me really cross.
I’ve said on more than one occasion that I’m sick of their frankly silly “punk” marketing, the final nail in the coffin for me was the bottles contained in this month’s (February ’17) “Equity For Punks” subscription box.
Half the beer is available in supermarkets, most as part of three for two or three for a fiver deals, and there were two bottles of their middle of the road Zeitgeist, which you used to be able to buy in Tesco before they discontinued it.
Nothing new or exciting, nothing that they’ve been shouting about like the Cloudwater collaboration or the latest Born To Die, but there were two tiny little (110ml) bottles of Hop Shot.
A 22% distilled beer.
And it’s terrible.
Where Tactical Nuclear Penguin and Sink The Bismarck had a good boozy warmth that was round and inviting, making the beer feel like the spirit that it really was, this is just a searing alcohol burn and a bilious yet strangely nondescript hit of hops that’s not much greater than their JackHammer or, say, Stone’s Ruination in its bitterness.
And presented in tiny bottles at over six quid a go this, to put it bluntly, stinks.
BrewDog, you stopped being punk some time ago.
Please, as a shareholder can I say that it really is time to grow up and concentrate on making the terrific beer that I know you’re capable of and to look after all the people who have put money into you, instead of dicking around with this kind of nonsense and the endless T-shirts and other combined tat that makes up the BrewDog range.