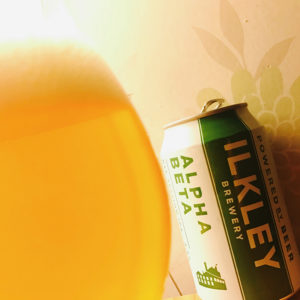 I got a bit excited when I heard that Ilkley were moving their beer into cans, and then I got excited again when I found that one of their first canned beers would be brewed with my beloved rye.
And so it was a great disappointment to find that the first word to spring to mind after my first swig of Alpha Beta was, “flimsy”.
You see there’s just not enough to this beer save for a super light bitter lemon swipe and some caramel and shortcake.
The rye should be adding a spicy meaty backbone, but it’s not strong enough and ends up feeling a little too much like cardboard, and even the smell drifts quickly from peach and passion fruit to brown paper.
Flimsy.