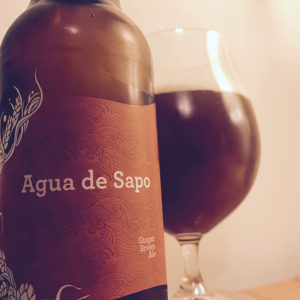 Nope, this doesn’t do it for me at all.
This is a Brown Ale with root ginger, sugar cane and lemon, but there’s a whole load of stuff missing.
Like the ginger, though there, just isn’t anywhere near fiery enough.
And the lemon isn’t quite fresh and bitter enough.
And as for the sugar cane, I can’t find it at all, and having spent my childhood in Jamaica chewing on it, I’m pretty sure I know what it tastes like.
But even though these extra ingredients in themselves aren’t big enough, they are still enough to knock the beer sideways.
You see, this is a Brown Ale, so you should be able to find a solid round and nutty toffee body, but everything is far too thin and watery.
As I said, this doesn’t do it for me at all.