Posted on February 2, 2017 by Simon Williams 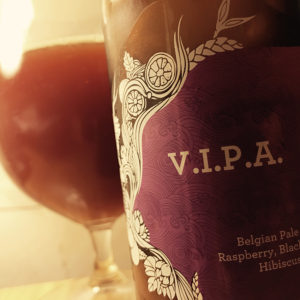 This is an IPA brewed with Belgian yeast, raspberries and blackcurrants, hibiscus and oak.
That’s a lot of stuff going on, but it just about manages to hang together.
The beer pours a nice plummy purple and smells of forest fruit and flower petals on an old  sideboard, which is a rather pleasant thing.
Taking a swig you find that the fruit, rather than being tart, which I was expecting, is warm and round and jammy, the yeast adding a lightly spiced earthiness and the malting giving you pancakes and waffles, honey and toffee while the hops cut through with some steely herbal leaves.
The oak ageing brings a soft damp woodiness that makes the beer feel even rounder and more succulent as you head to the boozy chest warming finish.