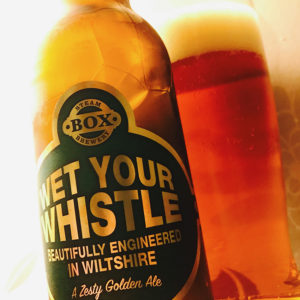 The bottle tells me that this is a “Zesty Golden Ale”.
It’s definitely a Golden Ale, and not a bad one, but it’s not particularly zesty in the manner that lots of beer is these days.
Pouring a rich gold, the smell is peach and hibiscus, and taking a mouthfull you find some peachiness in the flavour too.
Then there’s the usual Golden Ale thing, straw and Weetabix, honey, caramel and rich tea biscuits.
The hopping is a hit of light hedgerow greenery, hazel leaves and the merest hint of something lemony.
Pleasant and drinkable, certainly if you’re in the pub for an evening, but it won’t set your world alight.