Posted on February 3, 2017 by Simon Williams 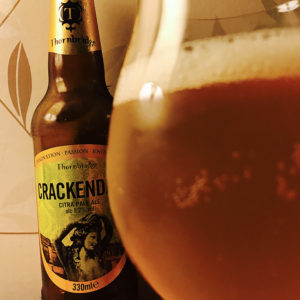 It’s the sugary sweetness in Thornbridge beer that I just can’t get on with.
I keep saying it, but always appear to be the only person to feel this way.
But Crackendale is slightly different, only slightly though.
It’s a Citra Pale Ale and the hops cut into the spun sugar sickliness just enough to make this a palatable beer for me.
Mind you, there’s a bit of a dirty feet and chemical cat wee thing going on – Citra in overload I’m guessing – in both the aroma and the flavour.
Did I say at one point that I wouldn’t review any more Thornbridge beers because I was coming across as simply being anti anything the brewery does?
If I didn’t then now is the time to say it, because I don’t like this at all.