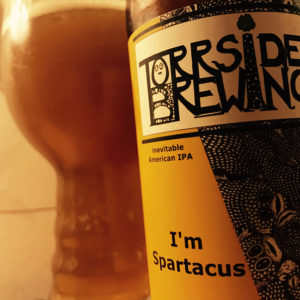 I love the humour of this beer, calling it an “Inevitable American IPA” just adds to the comedy of the Spartacus name.
What’s more, it’s a damned fine example of its style, pouring a pale gold with a little frothy head, its aroma is fruit jelly and hibiscus.
And Spartacus has a good body as well, it’s firm and round and packed with toffee and honey and brioche, creating a super base over which the hops slap and tickle with life.
You find sherbet lemons and lime leaves, papaya, peach and mango, steely dry herbal leaves, nettle tea and a dab of orange marmalade.
In a nutshell, I’m Spartacus isn’t just another Inevitable American IPA, it’s a damned fine one.