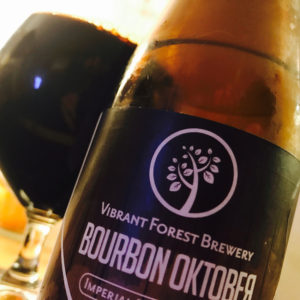 I had two bottles of this, and one of them was rather flat, which is a shame as with a little fizz this is a superb beer.
Aged in Bourbon barrels, this is an Imperial Stout with lots of character.
It pours an inky black and smells of rum and raisin chocolate and boozy prunes.
The malting is thick and deep, full of treacle tart, almonds and honey, burned wholemeal toast and black coffee, and there’s a good crunchy autumnal leaf litter hopping.
It’s crunchy and dry and tempered by a squidgy orange marmalade.
The barrel ageing adds a damp woodiness, lots of alcohol heat and a little fungal meatiness at the edges.
A superb beer, at least in one of the bottles.