Going Nutty For The Nut Shack 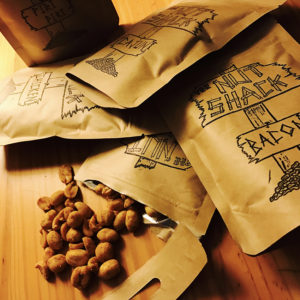 As much as we love beer, we love snacks.
Especially snacks that are interesting, tasty, something a little bit different.
So, how about peanuts?
Roasted peanuts.
But these aren’t your run of the mill behind the bar nuts, these are Nut Shack nuts and they’re super.
The bacon flavour are warm and smoky, the woodiness of the nuts working beautifully with the hickory and molasses, these would be lovely with a good Pale Ale.
Then there’s the chicken flavour.
I was unsure of this one until I opened the bag and took a sniff to find a proper roast chicken aroma, meaty and a little bit earthy, these would suit a Saison down to the ground.
Next I tried the Cajun flavour with their subtle liquorice bubbling away under a paprika and black pepper warmth, they made me want a sharp and bitter IPA.
The Piri Piri flavour starts with an onion and garlic base over which garlic, cayenne and chillis build into a soft heat, they’d prickle with life alongside a hearty Stout or a chocolatey Porter.
Finally I opened the Habanero and Garlic flavour, its bag warning me that these peanuts are so hot I should only eat them one at a time.
I ignored the warning and took a handful.
They really should be eaten one at a time.
These are fierce peanuts.
Delicious, but fierce.
The garlic is fruity and sweet and the habanero burns in the most delightful way.
But what beer to match with them?
I think they’d go with anything, as the beer would simply beer there as an aside to the head numbing flavour of the snack.
Hunt out some Nut Shack nuts, they’re absolutely super.

Founder of CAMRGB. Member of The British Guild Of Beer Writers. Leftist bigmouth. Old and grumpy.
View all posts by Simon Williams →
This entry was posted in Beer Review, CAMRGB and tagged Bar Snacks, Nuts, Snacks. Bookmark the permalink.