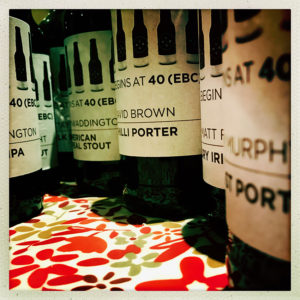 The Leeds Home Brew Collective are a small group of obsessive beer brewers based in and around said city.
They hold regular meetings in a city centre beer spot where they share their beer, their thoughts and, though this is purely a guess you understand, get a bit drunk together.
But what the group also does is enter competitions and hold competitions of their own.
After all, a friendly rivalry is a healthy thing.
Their latest competition is “Life Begins At 40 (EBC)” which was open to any beer over 40EBC meaning that any beer from medium brown to black could be entered.
And then they asked me if I’d like to take part in the judging.
I was flattered and delighted but unable to get up to Leeds on the evening that they had planned, and thought that that would mean I couldn’t do it.
But a week or so later a box full of beer arrived on my doorstep and, after giving the bottles some time to rest I started working my way through them with some excitement.
My initial thought on tasting all of them was what an amazing bunch of brewers they all are, producing seven beers all of which you would be happy to have bought from your local store.
It made my job very difficult and I have had to be really picky in order to come up with why one beer is better than all the others.
Thanks to all the LHBC members for allowing me to drink their beer, this is what I’ve decided: 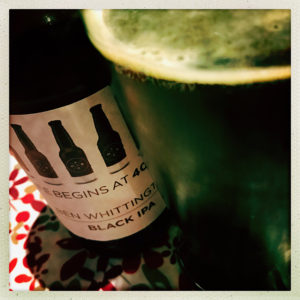 FIRST PLACE:
Ben Whittington Black IPA (7.2%)
This is very good.
Very good indeed.
Ben’s Black IPA pours an impenetrable purple brown with a tiny cappuccino head and smells of chocolate and black cherries.
The malting is thick and chewy and round, full of coffee and honey, dark chocolate, brown bread toast and a hint of coal tar soap, and the hops give you brittle green hedgerow foliage, bramble jelly, woody tobacco, lemon zest and redwood resin.
And in the finish the brown sugar syrup and orange marmalade sweetness is joined by an intriguing cherry meatiness that’s really rather tasty.
Lovely stuff. 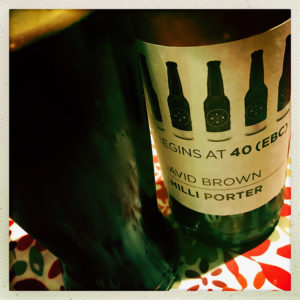 SECOND PLACE:
David Brown Chilli Porter (5.6%)
I do love a well made chilli beer and this one is very well done.
Initially I was worried that the beer wouldn’t have enough life as it looked a little flat pouring into my glass.
But I needn’t have worried, as the fizz is just enough to keep everything feeling lively.
The beer smells of treacle and roasted red peppers and sits a deep dark brown in my glass.
As I took a mouthful I found a very good dry milk chocolate.
You know that feeling of biting into a Flake and how it glues itself to the roof of your mouth?
That.
And it’s edged by sticky toffee pudding and a good swipe of herbal greenery from the hops.
And slowly, ever so slowly, the smoky chilli builds its fiery woody heat, prickling away at your face and growing with each mouthful making you reach for another glug to refresh your palate. 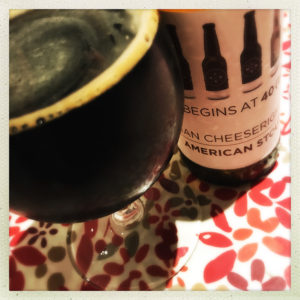 THIRD PLACE:
Ian Cheeseright American Stout (6.5%)
This is an American Stout brewed with Sorachi Ace and yes it’s as good as it sounds.
From its chocolate and window putty aroma to its deep purple brown colour, its coal tar and caramel malts to its bracken and green tea hops, this is a really superb beer to have been made at home.
The Sorachi Ace gives you lemongrass and green tea, chives, basil and a hint of watercress, while the malts sit thick and oily on your tongue, rich with burned toast, molasses, Marmite and cola, it has a deliciously bloody metallic edge to the finish.
If you’d paid a fiver for this in a hip craft beer shop you’d be over the moon. 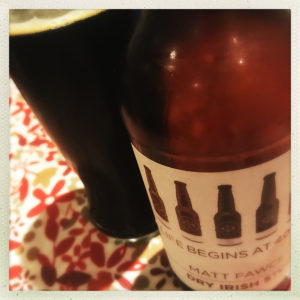 HONOURABLE MENTION:
Matt Fawcett Dry Irish Stout (4.5%)
Well now, this does exactly what it tells you that it’s going to do.
It’s a beer that pours a deep purple brown with a little cappuccino head and smells of chocolate and treacle.
And there’s treacle in the flavour too, along with lots of chocolate, toffee and coffee and some runny honey and toasted brown bread.
The hops add a sharp hit of stinging nettle greenery, chard and some steely basil, which is a much needed slash of colour across the dry biscuity malt body.
So I have to say, this is a very well made beer indeed.
It’s not a big shouty barrier breaking beer, it’s just a very well made Stout that leaves you happy and sated.

THE OTHERS, IN NO PARTICULAR ORDER: 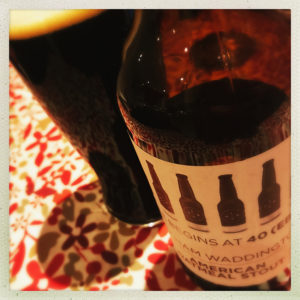 Graham Waddington American Oatmeal Stout (5.9%)
This is a pretty good home brewed beer, but it’s a little one dimensional.
The aroma is a little too mild, rather like a Mild in fact, chocolate and prunes mainly.
In fact I’d say that in my opinion this is more of an Oatmeal Mild than an Oatmeal Stout.
And that’s not a bad thing per se, it’s just not what it tells me that I’m going to get.
The body is chocolate and plums, toffee and brown bread, and I’ve just realised exactly what it is that I’m missing, and it’s all about description.
I’m told that this is an American Oatmeal Stout and so I expect something nearer to a creamy English Black IPA and instead I find a Mild.
A very good Mild, but a Mild nonetheless. 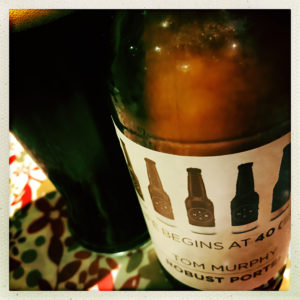 Tom Murphy Robust Porter (6.2%)
Another easy to drink beer, though this one tastes like it needs a bit of work.
It pours the right colour, a deep mahogany with a little cappuccino head, and it smells of chocolate and brandy snaps, but there’s a little too much alcohol bite in the body of the beer.
Sure you find cocoa and a touch of coffee, some toffee and biscuits, but where the hops should be giving you at the very least some crunchy leaves and maybe a twist of lemon, there’s a cold wash of alcohol.
The thing is, I’m being overly harsh because of the competition.
This is perfectly drinkable, it just hasn’t got the balance of some of the other beers on offer. 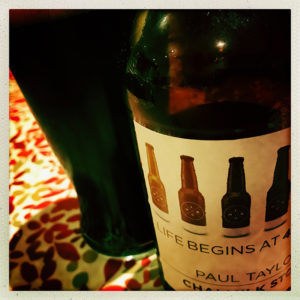 Paul Taylor Chai Milk Stout (6.3%)
If I was being very picky, I’d say that I’d like just a little more body to this beer.
But really, that’s me being a mega pain in the bum because this is a very nice beer indeed.
It pours an impenetrable black with a frothy cappuccino head and smells of cardamom biscuits, honey and tea leaves.
Taking a swig you get a big hit of Chai, all masala herbs and spices, star anise and warming woody cinnamon along with wholemeal toast, treacle toffee and coffee.
The hopping is dry and crunchy autumnal leaves, apple cores and nettle tea with a lick of lemon zest at the edges, and there’s a decent brown sugar and rum finish.
And so to be picky.
There needs to be a more lactose present to add that smooth creaminess to the body.
But in all honesty it’s such a small complaint as to be easily ignored as this is very good to drink.

THANKS TO LHBC FOR ALLOWING ME TO TAKE PART IN THIS.
I LOOK FORWARD TO MEETING YOU ALL IN A PUB AT SOME POINT.

One Response to Life Begins At 40 (EBC): A Home Brew Competition