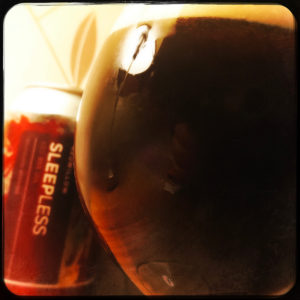 Sleepless is a Red Rye IPA that slinks it of its can a deep Ruby red with a little creamy head.
I have to say that I was expecting a lot more from the aroma of the beer than the weak toffee and cherries that wafted up at me as I poured.
But whatever was missing in the smell was made up for when I took a swig and found a big round beer that blends the honey, treacle and pancakes of the barley malts with the earthy spiced meaty hit of the rye, bringing a sticky brown sugar syrup coated creme brûlée of a body over which the hops add satsuma zest, pine resin, peach and lime that leads you to the most delightfully sticky bitter finish.