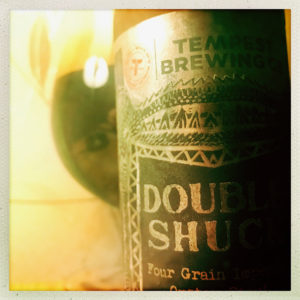 If it weren’t for the fact that after fourteen years of strict vegetarianism bordering on veganism – from the age of fourteen to twenty eight, if you’re wondering – I found that I loved firstly seafood and fish and then rare-to-the-point-of-mooing steak, this four grain imperial Oyster Stout from Tempest would be enough to make me think long and hard about my dietary choices.
Brewed with Lindesfarne Oysters and smoked paprika, this is one hell of a deer.
It pours fathoms deep and smells of salted and spiced bitter chocolate, which is a great place to begin.
Taking a swig you find a super thick and rich beer, creamy to the point of no return, like an oil slick in your face, the malts are heavy with black treacle tart, burned wholemeal toast, fried aubergine and runny honey.
The hopping is all crunchy autumnal leaf litter, dry woody walnuts and a slap of herbal greenery.
The paprika adds a lightly fruity smokiness and there’s a little sea salt and ozone from the Oysters as you head towards the sublime oak smoked rum finish.