Some time ago I drank a beer called Spratwaffler.
It was a low ABV Pale Ale and it was very good.
It had been brewed y Time & Tide and was packaged beautifully in a little shiny can.
Some time after that I drank their Root Of All Evil and was completely blown by the brilliant brewing that mixed beetroot with a Hefe.
And so I got in touch with them for a chat and they told me stuff that I’d like to relate as I think that you might find it interesting.

Hi, who are you?
Hi! I’m Drew, brewer/events manager at Time and Tide Brewing. Thanks for the interview! 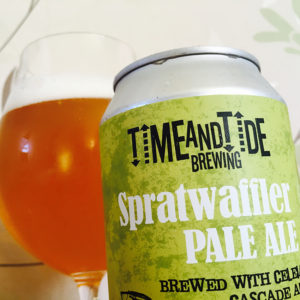 When and how did you get involved in brewing?
My journey started back in 2012 (I think, it may have been 2013) when I discovered a bottle shop near me that was selling some seriously eye-opening beer. I was getting inspired by breweries like Southern Tier, Evil Twin, The Kernel, people who were making world class beer. I was there one evening with my (now) wife and the Brooklyn Brew Shop kits caught my eye.
I bought the Everyday IPA kit. I cracked it out the next weekend and a home brewer was born!! My first batch was…Palatable, if temperamental.
I wasn’t the best, but I kept at it. I ended up becoming the store manager of that same bottle shop, aptly called The Bottle Shop in Canterbury. I learned a lot about beer, I learned a lot about the industry, I became part of the wholesale team, made a lot of friends and learned my trade. In 2016 I got married, had my first child (her name’s Phoebe, that’s not relevant but I’m a typical proud father…She’s very cute. You didn’t need to know that but she is), and I decided that the year wasn’t hectic enough so I decided to follow my dream of being part of a progressive craft brewery.
I’d known Paul (founder) and Sam (head-brewer) since they’d started as they’d worked quite closely with us at The Bottle Shop. I knew they were good guys and I knew that they really cared about the beer. I also knew that they were pretty fearless when it came to what they considered to be creative beer. The real crystallising moment for me was when they released Root of All Evil, the beetroot hefe, but they released a small batch of Root with birdseye chillies. The equivalent of just over a half chilli per can. It was fearless but, more importantly, it worked. That’s when I knew that if I was going to work for anyone then it was going to be them.
We talked, I told them I wanted to brew, they wanted to sell more beer. They could help me with one and I could help them with the other. It just seemed like a smart decision to make. 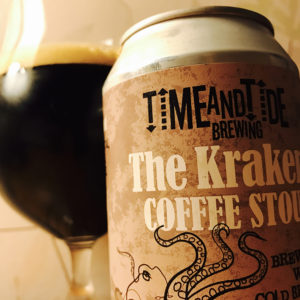 I feel the need to ask, though we all know…Why cans?
Purely for beer reasons. We started out in cask and 500ml bottles. There were issues with longevity and quality and it was decided that 330ml cans and KeyKeg were the way forward. The thing that really sold it was the complete eradication of potential light damage and the complete sealing of the beer, which keeps the beer fresher for longer. We used mobile canners initially but we now have our own canning line, which has cut costs out that we can pump back into creating bigger, better and more interesting beer.

Where are you brewing and what are you doing it on?
We started out as a cuckoo brewery, working out of Pig & Porter and Ripple Steam but we eventually moved a re-purposed hay barn in Eastry, just outside Sandwich in East Kent. We’ve got an oversized 20bbl kit, which is partially re-purposed from old farming equipment. It’s quite interesting, to me at least, that we are (in practical terms) a farmhouse brewery even though that’s not something we ever intended to be. We’ve got a 10bbl fermenter, 2 20bbls and a big shiny 40 as well as a pilot kit and a small selection of barrels. Currently we have English wine barrels but we’ll soon be getting around 20 Burgundy barrels in to play with. We’re in the fortunate position where we’ve got a decent amount of space and just need to work out efficient ways of filling it with brilliant things, so a full barrel ageing project is definitely on the cards. At first we’re going with just wine barrels but we’ll eventually work our way through to spirits because I think I’d be quite annoyed if we didn’t eventually have a bourbon barrel aged version of either Kraken or Double Stout. 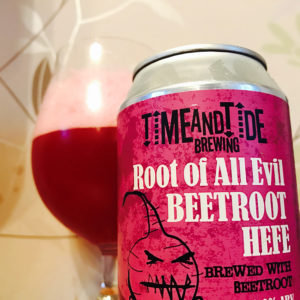 I particularly liked your Beetroot Hefe. How did that beer come about?
Ah, Root of All Evil is a really fun one, some people really like it and some people really don’t. Some people question whether it turns their piss red; those ones normally have underlying medical problems and I try to refer them to the closest available GP. It’s just one of those beers for us. It’s probably fair to say that our profile has increased over the last few months and more people are coming into contact with our beer. I would never have expected, that once we became a national brewery, that Root would be the one that bars and bottle shops go for before hitting up our lower ABV pale ales but there very much seems to be a cult following. On a local level the beer was viewed with mild suspicion and sold pretty poorly, there were a few exceptions who stood our ground like The Bottle Shop, The Twelve Taps and Macknade Fine Foods in Faversham but, other than that, it was a bit of a slog.
As a brewery we’re really inspired by the culinary world and love the idea of incorporating flavours that compliment or contrast with a wide array of styles. In this case we very much liked the idea of the sweet and earthy flavours from the beetroot blending in with the clove and spice of the hefe yeast. We’re happy with how it turned out and plan to play with Root as a base style, maybe releasing further versions with additional complimentary ingredients. Maybe a barrel aged version sometime in the future? I won’t rule it out. Definitely another chilli one, though I’ve suggested Habanero and Paul wants to do Naga, I suspect we’ll fall somewhere in the middle. Either that or go mad and get a bunch of Carolina Reapers in there.
As a side note I should probably mention Tom, he’s our apprentice brewer. He peeled beetroot for six hours for our last batch. After he’d finished you would’ve been forgiven for thinking he’d just done a shift in an abattoir. Stained from the elbow down in a reddy purple that apparently didn’t properly come out for a week. He often says (even if we haven’t been talking about Root, he’ll just bring it up anyway) that the peeling and the staining would have all been fine if it wasn’t for the beetroot only going into the boil for ten minutes. Six hours work for ten minutes in the kettle. He gets grumpy whenever we mention using any form of root vegetable in beer now. 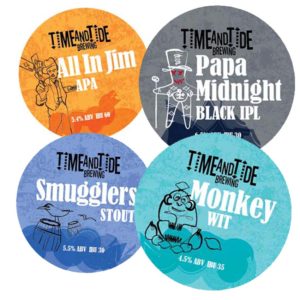 Where do you see Time & Tide going and how do you see it growing?
I want us to be among the best breweries in England. We ship to Sweden and Belgium and I’d like us to be one of the best English breweries exporting beer there too. I’d like a presence in America too but that might be me dreaming a bit. I may be a bit ambitious but I don’t see any reason why we can’t achieve whatever we want. The craft beer movement is a fascinating thing that recognises only a few core principals: Quality and Creativity. Well we love making really sessionable hoppy pales and we love making really rich and decadent stouts, we also really enjoy foraging and using whatever we can think of to create beer that we think is exceptional. We’re not special in this pursuit, there are guys like Omnipollo, To Ol, Mikkeller, Siren, Weird Beard, The Bruery, Cloudwater, The Kernel, Almanac; guys we really respect who have been treading that ground well before us. What makes us different is that, by virtue of choosing the path we have, alongside all these amazing breweries, the sheer power of numbers behind the infinite different permutations that go into making beer forces us to be different. We’re going to succeed because we’re different and we’re different because we’re different… Is the wholly unsatisfying conclusion to all of this.

Thanks to Drew for his time.
For more, go here to visit their website.