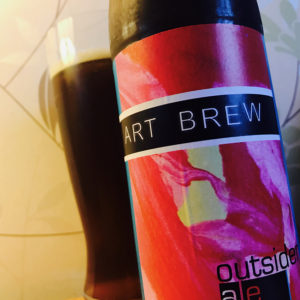 A “Brown beer suitable for most occasions […] Hopped with Nelson Sauvin, Green Bullet and Motueka”, this is why I love Art Brew.
Most breweries’ “Beer for all occasions” would be brown and malty and have the welcoming but unexciting slap of burdock that Fuggles gives, but not Art Brew.
No, they pack their go-to beer with fabulously fruity hops and unleash it into the world to enlighten and, I expect, confuse.
Outsider Ale has a lovely soft and chewy malt body, a Bitter body, it’s packed with toffee and biscuits, honey and brown bread, and the beer smells of apple cores and brown sugar.
But the hops sneak up on you with a gloriously dry bitterness that’s full of gooseberry skins and mown lawns, grapefruit and tarragon, lime leaves and kiwi fruit and basil, and they slowly change the beer from an easy drinking Bitter into a eye watering hop hit.
Super.