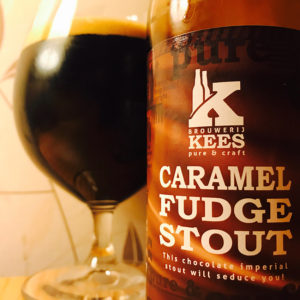 What an absolute delight this is.
Kees have created a thick and chewy beer that’s more like a desert than a drink.
Pouring a deep mahogany brown with a little creamy head, the aroma is Belgian truffles and toffee.
Taking a swig the first flavour I find was comfortingly familiar.
Remember making chocolate covered rice crispie cakes when you were a child?
That was the first flavour I found in this beer, and everything built from there.
Sticky caramel and chewy creamy fudge, a splash of black coffee and a hint of vanilla ice cream from the malts.
There’s some crisp toasted waffles and maple syrup pancakes too, while a good slap of green herbal hops add a much needed bitter edge to the seriously sweet malt body.
This is a beer to take your time over, a beer that you can eat with a spoon.
It’s a super beer and I love it.