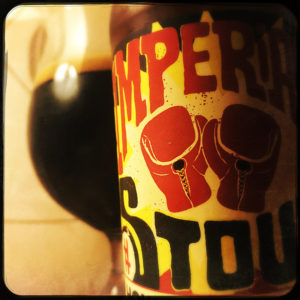 Fighting Ale is an Imperial Stout, and a very good one at that.
I doubt you’d be able to do much fighting after it though, as by the end your eyes will be crossed and your senses spinning.
Which is just what an enormous Stout should do.
The beer pours an inky black with a little cappuccino head and smells of chocolate plums.
And that’s a good place to start.
Taking a mouthful you find endless depths of malty goodness, from deep bitter chocolate to burned wholemeal toast, honey and treacle tart, and there’s a super hit of maple syrup and pine resin, crunchy leaf litter from the hops.
What’s more, the finish is as dry as a bone, powdery cocao, a hint of liquorice and some steely bitter herbs pushing you towards oblivion.
Fabulous.