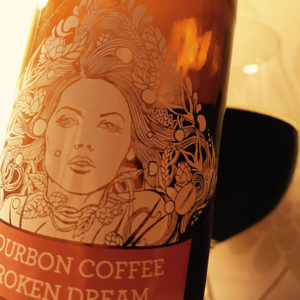 Decent enough this might be, but it’s the weakest of the Broken Dream versions that I’ve had so far.
Brewed with coffee beans aged in Bourbon barrels, this is a beer that’s smells of plums and coffee.
Taking a mouthful you find treacle tart and prunes, honey and biscuits and lots and lots of coffee.
There’s rum as well, it comes on like a warm cola drink steeped in booze and it ushers the coffee forward as you drink.
But that’s just the problem, as it pushes the coffee forward it pushes the other flavours into the darkness, leaving you with a bit of a gap where the beer’s body should be.
Drinkable but nothing exciting.