Swannay Brewery A Pair Of Porters 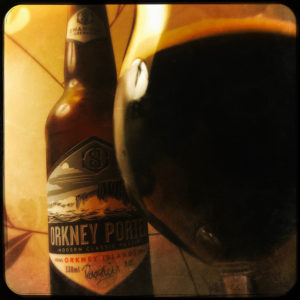 Orkney Porter (9%)
This is very good indeed.
It’s a Porter, that’s all.
But it’s so much more.
And yet it doesn’t seem to do anything more than a Porter should.
But the way this beer does its thing is superb.
It pours a deep purple brown and smells of forest fruit and India rubber, and taking a swig you find a big fat and chewy malt body, all honey and treacle tart, molasses, coffee, plum compote and rum and raisin chocolate.
There’s a good swipe of bitter country lane foliage from the hops as well, with hazel leaves and camomile tea, nettles, dandelion and burdock and a dash of lemon to freshen everything up.
And in the finish the forest fruit and rubber return to give a soft sweet ending to the lovely beer. 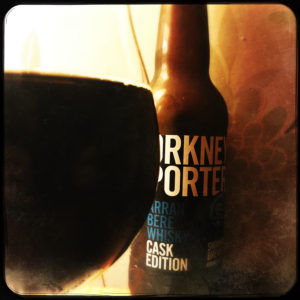 Orkney Porter Whisky Cask Edition (10.5%)
I’ve mentioned before why I have problems with Barrel ageing, but this beer just about manages to hang on to all the good things.
Enough to make this really rather fine.
There’s leather and damsons, plasticine, plums, rum and raisin chocolate, a slap of crunchy herbal hedgerow leaves, hazel and a lovely damp mushroomy earthiness.
The worry was that the beer looked rather flat as I poured, but it just about managed to retain enough fizz to make the beer feel alive, meaning that it pops and fizzes with fun right through to the sticky treacle tart and brandy booze finish.