Tempest Brewing Co. of Scotland are quietly going about the business of making superb beer, and while they’ve not been the easiest to get hold of, those who have have fallen in love.
I’m one of those people.
My first experience was a beer called Red Eye Flight back in 2014 and it knocked my socks off.
The brewery has had a bit of a rebrand and is slowly becoming more easily available, and while I was drinking a rather good Black IPA of theirs I decided that it was time to get to know them a little bit better. 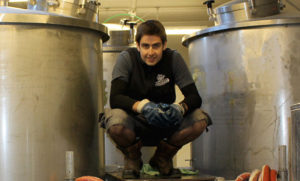 Hello. So tell me, who are you?
Hi I’m Gavin Meiklejohn, founder of Tempest Brewing Co based in the Scottish Borders.

When and how did you get involved in brewing?
Brewing began for me in 2004 when I was living in Christchurch New Zealand.
I was working as a chef running wedding functions with four days on and three off, I was brewing 20L batches of beer every Monday on a fairly sophisticated self-built garage brewery when I decided this was what I wanted to focus my time doing professionally.
A short brewing stint at Ballarat University Australia and I was looking to set up a 600litre brewery in Christchurch.
After some careful consideration mostly from conversations with mates back in Scotland who had visited NZ, tried my beers and kept telling me they couldn’t buy the beers I was making and I decided to head back to Scotland to set things up.
Things got sidetracked slightly when I saw a good business opportunity and bought a freehouse pub/restaurant in Kelso, three years later April 2010 I finally set up as a ten barrel brewery in an old disused dairy behind the pub.

You recently changed your branding and I like it a lot. How did it come about or were you just ready for a change?
The original branding was a bit raw, it had impact at the time on a pump clip but was very difficult to integrate on a bottle label. The whole re-brand was a very organic process, once we had the logo re-worked the bottle layout was pretty much done in house with input from all the staff. What you get from following a process like that is a more unique craft feel and less design agency driven result.

Where are you brewing and what are you doing it on?
We moved to our new Brewhouse in Tweedbank January 2015, it’s a 32hl brewlength which can double brew in 10hrs. We have full production control over our process with in-house lab for quality measurement. Packaging is in keg, cask and bottle on a 2000 BPH bottling line. 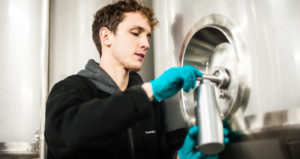 I find that there is something very particular about Tempest beer, something that tastes only like you. Is it a house yeast strain or water or…?
I guess we have always tried to make beers that we like to drink.
Our water is lovely and soft which is great for brewing various styles, our yeast is always propagated from a single vial in house and we may run up to 4 strains at any one time. Brewing great beer is a lot of little things done consistently very well and we’re laser focused on that.

Where do you see Tempest going and how do you see it growing?
We’re currently selling all the beer we can make which is a good thing, although we’re now running out of space so we’re investing in some 100hl outside fermentation tanks this year as well as a centrifuge to clarify our beers. Long term we’ll hopefully be in a new purpose built brewery with bistro-tap room and lots of happy staff and customers.

Here are my thoughts on some of Tempest’s latest beers: 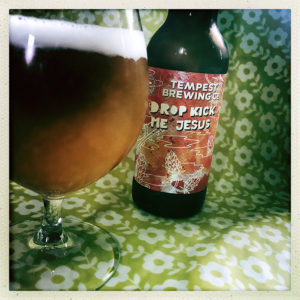 Drop Kick Me Jesus (5.2%)
I like this very much, the balance between the sweet warm malts and the bitter sourness is just perfect.
The result is a sour Pale Ale that provides you with all sorts of joy, from rich sugary caramel and honey, shortbread and pancakes, through the fizzy lemon bonbons and crisp fresh herbal leaves of the hops, to the lip smacking sour kiss in the finish.
And as you drink you find the beer has a lovely fruity aroma, all mango and passion fruit, keeping the beer soft and sweet and not allowing the sourness to become overpowering. 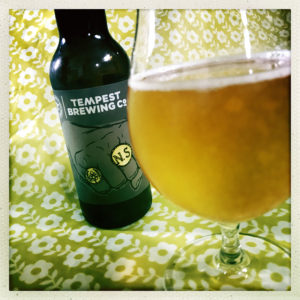 Nelson Sauvvy (5.4%)
The Nelson Sauvin in this little India Pale Lager are simply exquisite.
They’re bursting with gooseberries and grape skins, steely herbal foliage and a good twist of zesty lemon, an they sit above a deliciously soft and creamy malt base that’s a product of the slow fermentation that layering brings.
The beer pours a warm gold with a tiny little head and smells of freshly made lemonade and dewy meadows, and after the hop hit and the soft body you find a super dry and crisp, bitter and refreshing finish. 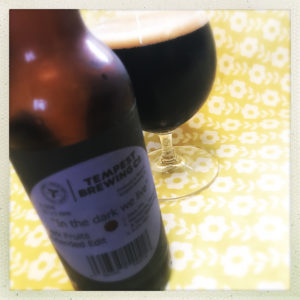 In The Dark We Live – Dark Fruit Edition (9%)
Right now Tempest appear to be able to do no wrong.
Take this Imperial Black IPA brewed with Blackberries, blackcurrants and black raspberries.
It could have gone one of several ways, but because it’s Tempest everything works out just right.
The beer pours an inky black with a little purple brown head and smells of dark chocolate and forest fruit jam.
Taking a mouthful you find a thick and deep malting full of bitter chocolate and malt loaf, rum and raisins, honey and digestive biscuits, with the hops coming on all sharp and bitter.
You find orange marmalade and lemon curd, steely fresh herbal leaves and fuzzy sherbet bonbons.
The addition of forest fruits adds a lovely fleshy fruit chewiness, like eating black cherries and good dark chocolate, making the beer feel a lot like a well made Black Forest gateau, albeit it with a different mix of berries.
The finish is soft and sticky and warm with booze, making the beer feel big and sexy and brilliant. 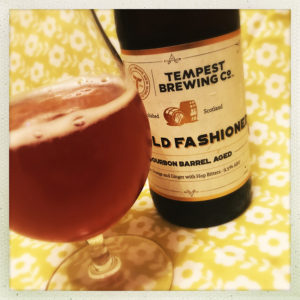 The Old Fashioned (9.5%)
This is a special bottle of beer, it’s a Kentucky Bourbon barrel aged version of Tempest’s already superb Marmalade On Rye.
The beer is brewed and then aged in the barrels before the fermentation is completed with fresh wort in the bottles.
What all this does is take the IPA and round out its edges, adding lots of extra layers of soft and silky vanilla pods, salty toasted Belgian waffles, hints of dandelion and burdock, pithy pencil shavings and camomile tea.
There’s also a lovely warm damp booze driven woodiness, it’s a round rum heat and it drives the ginger home, making it crackle and spark as you drink, lending a delightful earthiness to the orange marmalade and lemon zest of the finish.
This is a sensational brew that is currently my beer of 2017.

Lots of thanks to Gavin, Shannon and the Tempest Team for their time.
Brewery photographs used with kind permission.