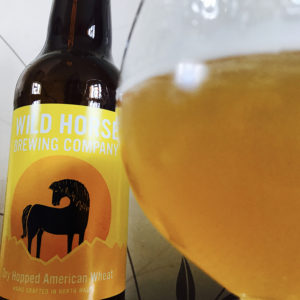 I’m going to be up in North Wales in the middle of May and so I’ll be hoping to find some of this brewery’s beer on tap because, if this little bottle is anything to go by, they’re worth searching out.
The beer is self explanatory I guess, but it’s made very well indeed, with a good balance between the half and half barley and wheat body and the big hit of West Coast hops.
So you find a beer that pours a light gold with a fluffy head and smells of fruit salad and sunshine, a beer whose body is a soft and creamy shortcake, hay bale, honey and spun sugar delight, a beer with a super hit of zingy fresh herbal leaves and lemon zest, grapefruit and papaya from its hops.
Yes, I’m really looking forward to being in Bethesda and Bangor in May.