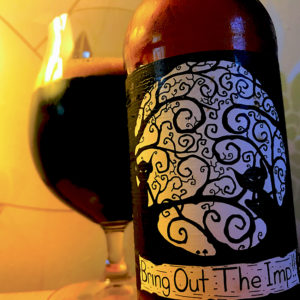 Two things.
Thing One: Waitrose have some inspired buyers who know their stuff and aren’t afraid to challenge their customers.
Thing Two: Alechemy make some great beer and this is an astonishing thing to find on a supermarket shelf.
Bring Out The Imp is an Imperial Stout brewed with molasses, liquorish and oatmeal, fermented with a Belgian yeast and aged in Côtes Du Rhône casks.
Yes, you read that right.
And you can find it in a supermarket.
Most importantly, it’s a thing of loveliness.
The beer pours tar thick and smells of rum and raisin chocolate and coal tar soap.
There’s a rich chewy malt packed with cocoa and black coffee, burned wholemeal toast and runny honey, while the hops provide an autumnal leaf litter crunch, red and woody, with conkers and lemon rind giving a nutty hit with a much needed citrus sharpness.
But the beer doesn’t end there.
Because the oatmeal makes the beer feel thick and creamy and gives a touch of vanilla while the barrel ageing adds a damp woodiness and a delightful tongue crinkling tannin dryness to the round brown sugar finish.
I love this.