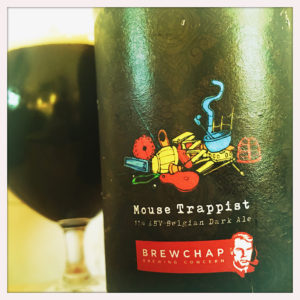 Man alive, this is good.
Mouse Trappist is Brewchap’s take on a Trappist Triple and it’s very clever indeed.
It pours an inky black with a little ring of bubbles for a head and smells of coal tar soap, black cherries and honey.
Taking a swig you find that this beer is basically a Black Forest Gateaux attacked by liquorice.
There are cherries and raspberry jam, there’s dark chocolate and vanilla, and then there’s a massive thwack of liquorice root and a deep brandy booze rinsed in black coffee.
You also find a nice black coffee woodiness and a crunchy red leaf litter, orange marmalade and lemon zest from the hops making for a finish that’s sticky and satisfyingly chewy but glinting with a lovely bitterness.