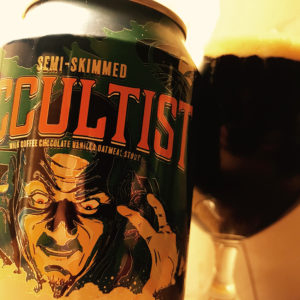 This is a Milk Coffee Chocolate Vanilla Oatmeal Stout, or in other words a beer that’s trying to hard.
It’s alright as it goes, but it’s nothing exceptional.
What we have here is a decent high octane Milk Stout that pours a rich purple brown and smells of coffee and putty.
The body of the beer is a rich toffee, brandy butter and honey brioche thing and there are some crunchy red leaf litter hops that add a bit of zing to the beer’s edges.
But the additions of coffee and vanilla don’t register too highly, the coffee and chocolate could easily be the work of a good malt bill and the vanilla is an aside that slips away with the oiliness that the lactose gives you.
And in the finish the putty from the aroma jumps out with a slightly chemical burn that adds a bit of plasticine to end of the beer.
With this one BrewDog really are trying too hard.