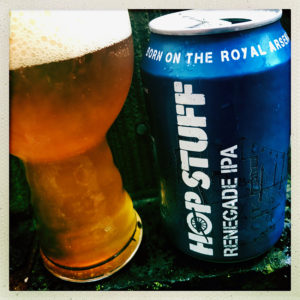 Hop Stuff, a brewery that I got to know some time ago are the latest to start canning their core range of beer and they’ve kindly sent me some to try.
The cans certainly look good, and judging by the amount of yeasty bits that poured into my glass when I opened the Renegade IPA, the Hop Stuff gang have ensured that there’s plenty of conditioning going on inside their little metal jackets.
And in actual fact, my can of IPA was a little too conditioned, pouring with a near uncontrollable cumulonimbus of a head and smelling a little too gassy.
And that’s a shame as Renegade IPA is usually a solid easy drinking beer, it’s the beer that you find once you leave the massive attack of foam to die down and swish your glass around. 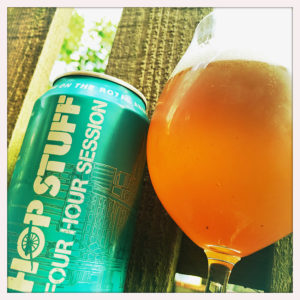 A beer with a big orange and honeysuckle aroma, a chewy caramel wafer and brioche malt and shed loads of marmalade, lemon bonbons and steely herbal leaves from the hops.
So if you buy one and it froths at the mouth, let it relax for a minute or two and you’ll be fine while we wait for the brewery to dial back on the yeast injection and let their cans condition a little more gently.
The Session IPA, on the other hand, is beautifully conditioned and tastes as fresh as a daisy, pouring a bright gold and smelling of honeysuckle and passion flowers. 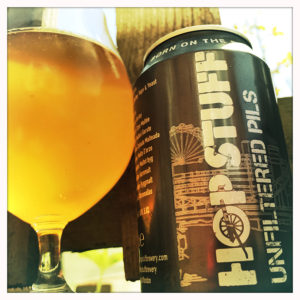 The malting is perhaps a little too light, though it’s definitely there, providing some nice caramel and shortcake, waffle and honey, and the hops are all sharp herbal leaves, lemon zest and passion fruit.
Unfortunately the Unfiltered Pils, my can at least, is entirely flat.
No carbonation at all.
There are some nice flavours going on, from toffee pop corn malting to a stinging nettle and lemon zest hopping, but everything gets oily and feels wrong due to the lack of any life.
Still, on the whole, it’s worth checking out Hop Stuff dressed in their new shiny suits.

Founder of CAMRGB. Member of The British Guild Of Beer Writers. Leftist bigmouth. Old and grumpy.
View all posts by Simon Williams →
This entry was posted in Beer Review, Brewery, CAMRGB, Uncategorized. Bookmark the permalink.

One Response to Canning Town? No It’s The Arsenal: Hop Stuff Go Metal