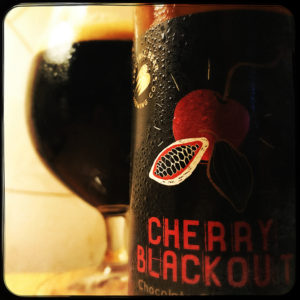 Beer as pudding?
This’ll do nicely.
The hops here are Fuggles and Phoenix, and they play an important part in a beer that, is on the surface, all about everything but its hopping.
And that’s because the hops provide a hint of earthy liquorice and a subtle hit of lemon zest that adds just a touch of brightness and a glint of something fresh to a beer that’s round and thick and chewy.
This is a beer that feels like a chocolate cake.
A Black Forest Gateaux in fact.
There’s round fleshy cherries, lots of deep dark chocolate, a little black coffee, raisins and vanilla, and a chest warming rum booziness.
It’s like a Ben & Jerry’s flavour in beer form.
Very good indeed.