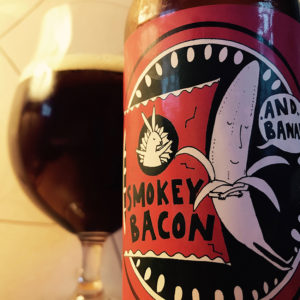 This beer isn’t anywhere near as out there as you might think.
Supposedly it has banana flavours from its yeast and bacon flavours from its beech smoked malt.
It kind of does, but not enough to say that this is a bacon and banana beer.
In fact, this is much closer to a decent Dunkel, pouring a rich ruby red and smelling of black cherries and treacle tart with just a hint of foam banana sweets at the edges.
The body is brandy snaps and honey, wafers and toffee apples, and there’s a red crunchy autumnal leaf litter, maple syrup and lemon zest from the hops.
The beech smoke is very very subtle, barely discernible in fact, just adding a quiet woody warmth to the beer’s body.
All that said, I could drink this all evening, it’s just not as wacky as you may fear.