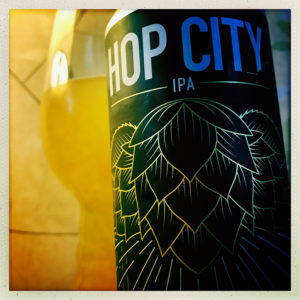 Brewed in collaboration with Cloudwater as part of the Hop City celebration and beautifully presented in a can with a peelable label, this is a decent IPA but sadly nowhere near as amazing as I’d hoped that it would be.
There’s nothing wrong with it per se, nothing at all, it just doesn’t have the depth of similar beers that have been appearing recently.
It pours a pale gold and smells of fruit salad and Juicy Fruit chewing gum and there’s some good fresh flavours from the hops as you take a swig.
You find mango and satsuma, lemon and lime, along with some very nice apple and peach, all fresh and very nice, but the malting isn’t up to the job, with a little wash of caramel and some honey over shortcake, it doesn’t have enough body and so, for me at least, everything feels more than a little one dimensional.
What this means is that, though there’s a lovely fresh fruit juice thing in the finish, it’s all rather soft and watery rather than bitter and dry.