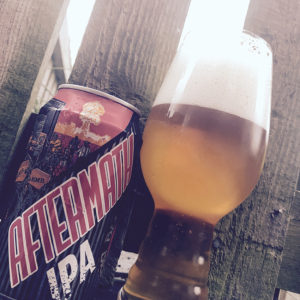 It does make me smile how, over here in the UK, we can happily talk about an IPA of between four and six percent as a good strong beer, whereas in the USA – and evidenced here by Black Market – this beer, at five point eight, is seen as being, “for the IPA drinker who seeks a lower ABV.”
Anyhow, Aftermath is a decent IPA that’s full of crisp and sharp lemon skins and grapefruit zest, orange juice and a little peach from its hops that sit delightfully over a round and rather creamy wafer biscuit, honey and vanilla malting.
Then there’s the sweet passion fruit and honeysuckle aroma and the big fly away foamy cloud of a head to enjoy too.
Very good indeed.