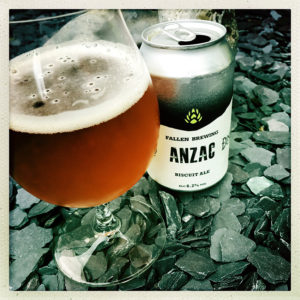 Brewed in collaboration with The Bow Bar and Elixir Brewing, this beer is brewed as a tribute to the Anzacs – The Australian And New Zealand Army Corps – who suffered heavy losses during the First World War.
Biscuits baked with coconut, oats and golden syrup were sent to the troops and this beer uses those ingredients.
Pouring the beer you get an aroma of caramel and orchard fruit and as you take a mouthful the initial flavour is rich golden oat biscuits, sweet sticky syrup and crunchy bran flakes.
It’s difficult to detect the coconut save for a clean woodiness in the background – but then I’ve almost always struggled to find coconut in beers that have been brewed with it – and over this malty goodness there’s a big hit of Australian and New Zealand hops that bring kiwi freshness, lime zest zing, some white grape and gooseberry skins, and lemon sherbet that is pushed forward in the finish by a good alcohol warmth.
All in all another winner from Fallen.