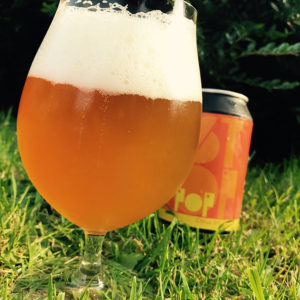 Perhaps it’s whatever First Chop are doing to remove gluten that’s made this beer feel weird, but whatever it is there’s something not quite right about this can of Pop.
And it’s a real pity as I have always enjoyed First Chop’s beer in the past.
Pop is a citrus IPA brewed with orange oil and there’s a great big gap right in the heart of the beer where the round and rich toffee and biscuits should be, leaving the beer feeling empty and watery and thin, the orange oil not tasting orangey enough while feeling far too oily.
And then, to make matters worse, in the finish there’s a lightly bilious chemical aftertaste that reminds me of other gluten free beer I’ve tried.
Nope, I don’t like this at all.