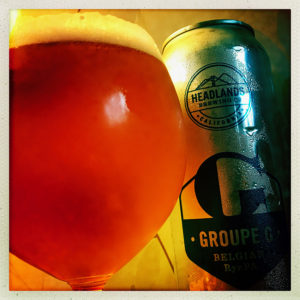 Now this, this is bloody marvellous.
A rye based IPA brewed with a Belgian yeast, Groupe G is an absolute delight.
It pours a rich gold with a little foamy head and smells of redwood resin, almond parfait and candy canes, and taking a swig you find that rich and very American two row barley spun sugar sweetness along with a big earthy spiced hit from the rye.
It’s meaty and chewy and demands your attention while the hops slap you with grapefruit zest and orange marmalade, lemon bonbons, basil leaves and rolling tobacco.
And all the while the Belgian yeast hums away in the background with its earthy spice and orchard fruits that add a big round body to the bitter finish of this super beer.