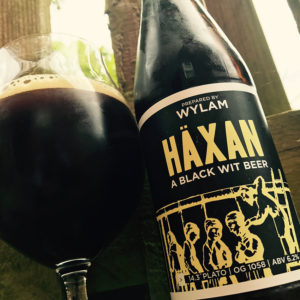 Häxan is a Black Wit beer and it’s bloody marvellous.
it pours an inky black with a little cappuccino head and smells of liquorice and curry spices.
The body of the beer is a deep rich chocolate, coffee, treacle tart and molasses joy and it’s punctuated by a blast of peppery spices, from cardamom to nutmeg, black pepper to cloves, the beer is big and bold and intense.
There are some very good and much needed hops that bring a lime leaf bitterness and a touch of woody rolling tobacco while the beer feels round and creamy as you head towards the superbly dry bitter finish.