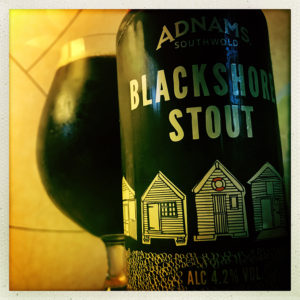 A little while ago I tried Adnam’s Blackshore Stout from keg and really enjoyed it, and so I was very interested to see that it had been canned, though I was slightly worried about the beer being canned rather than bottled because, even though I’m a can convert in general, I find that Stout in cans is often not quite as pleasant as Stout in bottles.
Though I’ve no idea why.
Maybe it’s psychological.
Anyhow, Blackshore Stout pours a deep dark purple brown and smells of plums and treacle.
There’s some treacle tart in the flavour as well, along with a good dab of honey and some bran rich biscuits.
The hopping is brittle and dry and autumnal, all red leaf litter, aniseed, hazel leaves, nettle tea and a little bit of orange marmalade.
In the finish there’s some coffee and chocolate that makes Blackshore feel round and satisfying.
Personally I’d like to try this beer at a slightly heavier ABV and presented in a bottle, but that’s just me and my functioning alcoholism.
With Blackshore in a can, Adnams have got their low ABV Stout pretty much on the money.