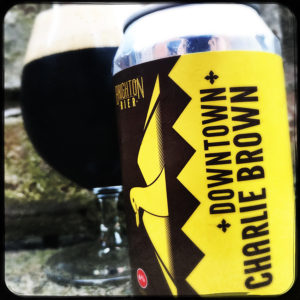 A heavily Hopped American Brown Stout, this is really rather good.
It’s amusing and rather clever, calling the beer Charlie Brown and then stating that the beer doesn’t contain peanuts, as there is a distinct peanut butter tinge to the rum and raisin aroma.
There are a handful of peanuts in the flavour too, the malting coming on all fat and heavy with chocolate and nuts, coffee, almonds and runny honey.
The hops, including a dry hopping of HBC431, are dry and brittle, bitter and pithy, with chard and sherbet lemons, rocket and lime leaves, before the malting comes back in with a dark chocolate creaminess in the finish.
Very good.