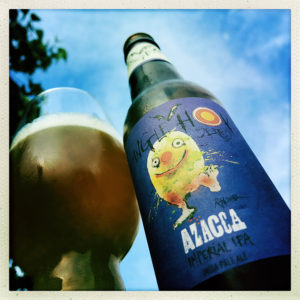 I’m a bit late to this particular party it would seem, as Untappd tells me that this beer is no longer in production.
Azacca is a new hop to me and maybe it’s the fact that this is a rather old bottle, but rather than finding the big citrus flavours I’m told are here, there’s lots of pithy hedgerow greenery, nettle tea and a lick of aniseed.
Rather like an amped up version of a traditional British hop variety in fact.
The malting is driven by that all American spun sugar heart, candy canes, waffles and honey, and the aroma is barley sugar sweets, pineapple and mango.
In the finish you find a hard searing dryness pushed along by a sexy alcohol warmth that reminds you how big this IPA is.
I like this a lot.
And as for the party, it’s better late than never.