It had been a hot summer’s day and the evening was turning muggy and close.
The food was eaten, the kids were in bed and I’d had a couple of beers while catching up on emails and Twitter feeds.
And as the night drew in and darkness descended I decided that it was Stout time.
I love a Stout to end the evening and I’d got a couple of Milk Stouts in my fridge ready to go.
I brought them in and opened the first one expecting a rich creamy treat, but the beer had other ideas. 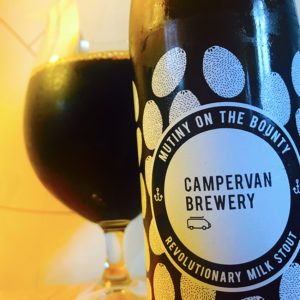 Campervan Brewery Mutiny On The Bounty (4.2%)

I’m afraid that whether or not this has got roasted coconut added to it, it’s so flat that the lactose makes Mutiny On The Bounty feel thin and weedy and unpleasantly oily.
Sure there’s a bit of chocolate and a splash of coffee, and there might even be some prunes and a dab of honey, but all of the stuff that ought to make this beer good and drinkable pale into insignificance against the way that this beer feels through being as flat as dish water.
Maybe it’s just this bottle.
Oh, and as for the coconut, it’s nowhere to be found. 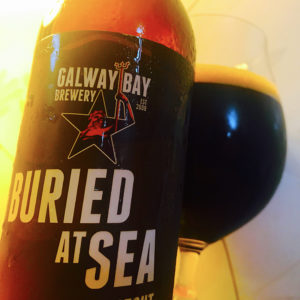 This is wrong in a completely different way.
Galway Bay’s Milk Stout is far too gassy, making the beer too fizzy, too full of air.
The fizz is alright in and of itself, but there’s just not enough body, the beer is simply not stout enough, and so everything becomes airy and insignificant.
Supposedly brewed with chocolate, the malt body may as well be what is giving that particular flavour as there’s nothing to suggest this extra addition to the recipe.
You also find some biscuits and a touch of honey, and there’s even a hint of green herbal shrubbery from the hops, but everything is far too thin and then made sickly sweet by the oily buttery lactose that pops up in the finish.
Nope.