As a general rule I steer clear of low alcohol beer.
I like the body and punch of stronger beer and often find that the really low ABVs make for athin and heartless drink.
But occasionally I come across something that works just right, and the other day I came across two of them.
It was a pleasant surprise to find beer with such low alcohol content that I not only enjoyed, but would look for again. 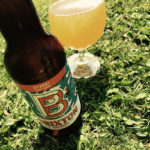 Brixton Brewery Spark! (2.8%)
Brixton’s Table Beer can be summed up very simply.
It is soft, round and refreshing.
There’s lots of lovely tropical fruit, guava, mango, lemon and lime create a fresh and zingy experience, while the malting gives you a solid, if subtle, waffle and caramel body.
And that’s about your lot, though with a beer of such a light ABV, that’s plenty. 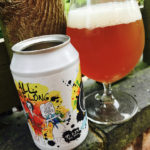 London Beer Factory All Night Long (3.3%)
Super light and with a pleasantly creamy body, All Night Long is a rather fine little Table Beer.
What helps is that LBF haven’t tried to cram too many hops into it which can often make a beer as light as this feel thin and watery, and instead there’s a decent toffee popcorn, honey and wafer malt with the hops sparking and zipping about over the top with lemon zest and a dab of orange marmalade.
Very good.