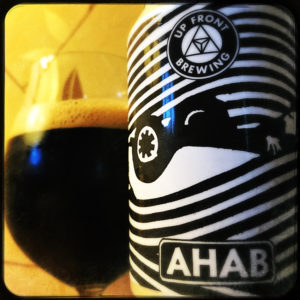 Ahab is a beautifully packaged can of Stout brewed at Drygate Brewery in Glasgow.
So, is Upfront a cuckoo brewer or are they contract brewing, I’ve no idea.
I could Google it and find out but in all honesty I’m not that bothered when their beer, however it is produced, is as good as this.
You see, Ahab is a super little Stout that’s got a dry as a bone bitter chocolate and black coffee body, a pile of crunchy brittle autumnal leaf litter hops, a splash of lemon zest and a dab of orange marmalade that cuts across a walnut whip, cardboard box and treacle tart malt body and a smell that’s all prunes and chocolate ice cream.
All in all, Upfront can be whatever they want to be as long as they keep making beer like this.