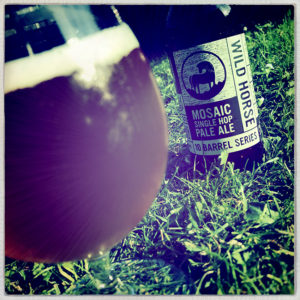 A few weeks ago I was in the tiny village of Bethesda, in the foothills of Snowdonia.
My band were waiting to soundcheck at the amazing Neuadd Ogwen and we were sitting in the pub next door.
On the bar they had a Wild Horse Pale Ale and it was light and fruity and eminently drinkable, and this bottle really reminds me of that beer and in so doing reminds me of that night a couple of months ago when I shared a stage with my old mates The Nightingales and had John from Gorky’s Zygotic Mynci as a sound engineer.
This beer is part of Wild Horse’s 10 Barrel Series, a series that speaks for itself, beer brewed as a one off on the brewery’s pilot kit and not repeated.
The beer pours a shiny gold and smells of apricot jam and passion flowers, and taking a swig you find a soft and chewy caramel wafer malt body, some honey and maybe a waffle or two before the Mosaic hops do what they do.
Lots of garden foliage, melon and lemon, lime and mango lead you to a deliciously bitter sherbet lemon finish.
Very good indeed.