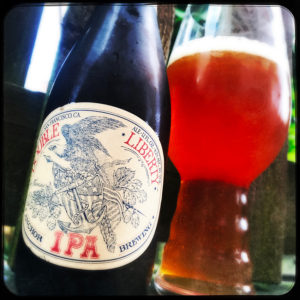 This is the best beer I’ve had by Anchor for some time.
It’s a big and rather harsh Double IPA.
Harsh in a good way, bold and bitter as can be, curling your teeth and making your lips recede as you drink.
The beer pours a rich gold with a fluffy head and smells of honey and tropical fruit salad and just a hint of nail varnish.
The malting is creamy and smooth, all honey and toffee, bran flakes and brown bread, as well as a large splash of apple juice, along with that two row barley spun sugar and candy canes thing, and all the while the hops hit you again and again with bitter and pithy hedgerow greenery, sharp as a knife lemon zest and a great big blob of orange marmalade.
All this is pushed along by a hefty alcohol warmth that makes the beer feel even bigger and, if I’m honest, where some of the harshness comes from as you head towards the unremittingly dry bitter finish.