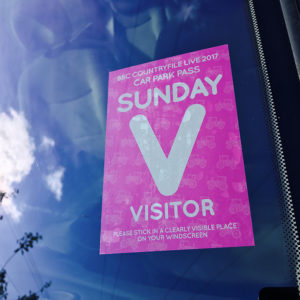 Yesterday we went to Countryfile Live, taking a strangulated route suggested by the SatNav that instead of sending us down the M1, decided we should drive through the centre of Rugby and along the backroads of Eastern Warwickshire before entering Oxfordshire.
The journey had just started to feel as though it would never end when we got to the edge of Woodstock and finally found signs directing us to Countryfile.
The drive through the grounds of Blenheim Palace to the allocated parking site winds across mind bogglingly vast landscapes, from what seems like endless arable land before, turning a sharp right, you are greeted with a processional avenue that heads towards the palace itself.
As the palace grows and you are given the impression that you are about to drive right up to it, a sharp left takes you down into a treelined valley before rising again to see a large boating lake to your right.
It’s a stunning way of entering a venue and, passing the palace itself, gives you an idea of the scale and grandeur of the place.
We parked the car, our Visitors pass displayed in the window saving us a fiver on the parking space and went to find the Press Accreditation desk. 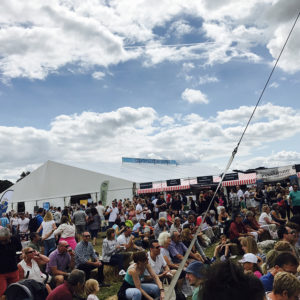 My youngest, Rose, being a Blue Peter badge holder could get in free regardless of my Press Pass, and wore her badge proudly, it being the first time she’d used it to get in to anything.
The first stop was food, and there was a lot of choice, almost all of which looked appetising, but where was the beer?
After all, that was what I was there to write about.
That is what I’d been given the pass for.
“There’s always The Craven Arms Pub area,” I thought to myself as we munched our lunch and headed deeper into the grounds.
The crowds were enormous and the weather was fabulous as we picked our way past clothing outlets and farm machinery, fun fairs and sheep racing rings.
You see, we had a separate mission, we wanted to see the Countryfile Live team on the main stage.
I say we, I mean three of us as my son, George, being twelve wanted nothing of such nonsense, it being more important to him to scowl and walk glumly around wishing he could be anywhere else.
We found seats in the small arena just as John Culshaw was introducing the show and thoroughly enjoyed the question and answer session, quizz and mini circus that was presented to us. 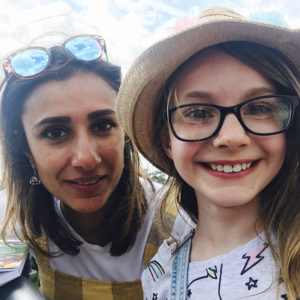 In attendance were three of the presenters Tom Heap, Anita Rani and the legendary John Craven, all of whom genuinely appeared to be enjoying themselves and happily stayed to sign autographs and have photographs taken after the half hour show.
Rose was very excited to meet Anita Rani who was friendly and warm and more than happy to have her photo taken with my daughter and I’m pretty sure after we’d gone, would have said to whoever would listen that, “I know him from somewhere?”
You see, we’ve met before.
A lifetime ago when I was managing Nation Records and putting on World Music stuff around London I was introduced to Anita by either DJ Nerm or Bobby Friction, both at that time up and coming DJs on the circuit who these days work for, amongst others, the BBC Asian Network.
Miss Rani was hanging out with them at an event and I’m sure that the moment we said hello would be etched in her mind just as it is in mine.
Anyhow, back in the real world, I said that I really needed to go and find some beer to write about and we headed past the pony racing ring, stopping for a moment to watch the galloping hooves, to the “Craft Ale Tent”.
All the beer was gone apart from some rather warm bottles of Hook Norton’s Old Hooky being flogged for three times the price you can find it in Sainsbury’s.
Mind you, looking at the list of what might have been was more than a little disappointing, with Hook Norton having the majority share and just a couple of XL and Loddington offerings included. 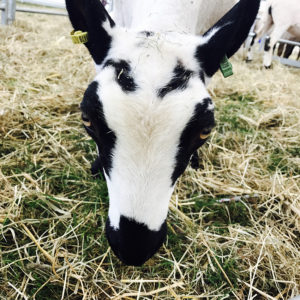 It’s sheep we’re up against.

It all looked rather sorry and I was getting thirsty.
“Head over to the Craven Arms,” Sue said, “and I’ll get the kids an ice cream.”
So that’s what I did, dreams of something by The Wild Beer Company who had recently been highlighted in an item on the Countryfile TV show, billowing around my brain.
And then I arrived at The Craven Arms and was presented with Greene King and Carling.
My heart sank.
I went back to find the family and we wandered around the lake and into the farm arena to see the animals when I spotted another small bar at the end of a long avenue.
More Greene King, more Carling, more of the same.
Maybe it’s simply that the breweries decided not to pay the cost of showing their wares, or maybe they weren’t invited to do so, but there was a vast gulf between the kind of food on offer – highlighting beautiful artisinal produce – and the drinks, which were standard Friday night fight juice.
On the way out of the venue I grabbed four overpriced bottles of water and we headed home.
Countryfile 2017 was a very good family day out, if rather expensive once ticket prices are added to the very high cost of buying anything to eat inside the show ground, but don’t go looking for beer, you won’t find any.