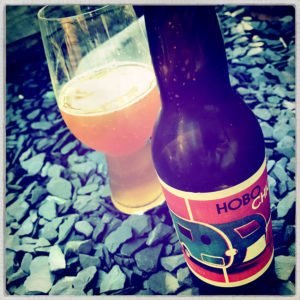 Dry & Bitter currently seem unable to do anything wrong, this Double IPA being just another example.
Brewed with Citra, Chinook and Simcoe, this is a big fruity beer with a solid malt backbone, and that’s where we’re going to start.
The malt is round and chewy and satisfying, all biscuits and honey, waffles, pancakes and toffee, it’s sticky and gooey and given a lovely salty edge by the yeast.
The beer smells big and bold and full of fun, with a whole salad of fruity goodness assaulting your nose as you drink, promising a lot and not disappointing as the hops give you lemon zest and lime pith, mango and grapefruit, peach and orange marmalade, as well as some lovely fresh rolling tobacco woodiness just before the finish comes on super dry, crisp and bitter.
Super stuff.