Poppyland Brewery Back From The Dead (5.2%) 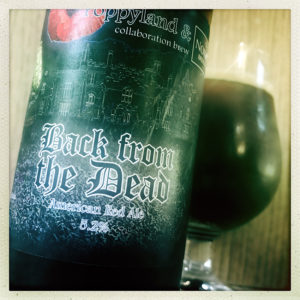 Brewed in collaboration with The Norfolk Brewhouse, Back From The Dead is an American Red Ale that has been brewed with ingredients that it was believed had disappeared.
The barley is Chevalier, originally selected in the 1920s but last used commercially in the 1930s, it was recently resurrected by the John Innes Centre from just three, count them, remaining seeds.
The hops, variety OZ97A otherwise known as Ernest, was first trialled in the late fifties but disregarded as brewers at the time thought it too American, and is now being cultivated by Charles Faram, and the yeast is Poppyland’s Kveik, an ancient strain that Martin collected in Norway and now cultivates for use in his brewery in Cromer.
The result is a multi-layered, deep and interesting beer, a beer that you’ll want to take your time over.
Pouring a muddy mahogany brown, the aroma is prunes and plums and a little splash of apple juice, and taking a mouthful you find a light digestive biscuit, honey, some salted caramel and a hefty serving of treacle tart.
The hops bring a sharp lemon and grapefruit zing to the edges of the beer with a round and earthy liquorice front and centre, while that Kveik yeast nudges you towards wild sourness without ever tipping you over the edge, instead adding a musty meaty spice and a little mushroomy goodness to the fruity finish.

One Response to Poppyland Brewery Back From The Dead (5.2%)