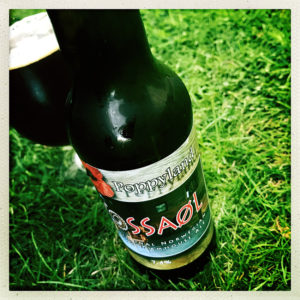 A couple of years ago Martin Warren, owner and brewery at Poppyland went on a journey of discovery through Norway which is lovingly described in his blog.
While there he collected an heirloom yeast and lovingly looked after it, culturing and growing it in his brewery in Cromer, and this Kveik that he took from Voss in Western Norway plays a major part in this fascinating beer.
Vossaøl is a traditional Norwegian homebrew beer style, that is sometimes brewed as an uncarbonated drink, much like the first version of this beer that Martin created in 2016.
To give you some context, Norway has a very strict governance over alcohol sales and some very high tax on booze that sees the main access to alcohol being through the Vinmonopoly, literally the government’s Wine Monopoly.
It’s why so many Norwegians distill their own Aquavit and brew their own beer.
Vossaøl is a conker red beer that smells of apricots and prunes, a beer that has a lovely rich round toffee body, the yeast adding a great big meaty backbone with just a hint of sourness, and a teeny tiny glimmer of damp woodland fungal Saison flavours.
The hopping is all hedgerow greenery, lemon zest and orange marmalade, giving you a delicious bitter bite that hints at a prickling sourness, but the beer swings back towards a delicious treacle tart brown sugar sweetness in the finish.
Vossaøl is an astonishing beer.