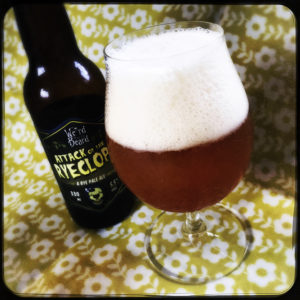 Attack Of The Ryeclops (5.5%)
I love rye, I really do.
I’ve said it so many times before and I’ll keep on keeping on with it.
And here the rye is king, bringing a dirty sexiness, an earthy dryness, a rich round meaty French Kiss to this lively little Pale Ale.
Attack of The Ryeclops pours with a billowing cloud of foam for a head and smells of spicy peach cobbler.
Taking a great big swig you find a sticky toffee, honey and waffle malt with a large dollop of wholemeal bread dough and a hint of meaty pumpernickel from that lovely rye, while the hops are a swish of orange rind and lemon zest, sherbet and mango and lime leaf pithiness as you head towards the sharp bitterness of the finish. 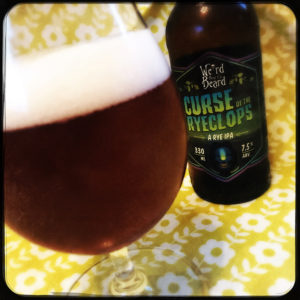 Curse Of The Ryeclops (7.5%)
You know how it’s all too easy to take things or people that you love for granted?
I’d forgotten just how good Weird Beard are.
No, not forgotten, become blasé about their goodness.
But this little parcel of recent brews has reminded me, as I open and pour this superb Rye based IPA, that Weird Beard are marvellous, and spending an evening in the company of a few bottles of their beer is like spending an evening with an old friend, for Weird Beard and CAMRGB pretty much grew up together.
Curse is a superb IPA with a rye malt base, meaning the beer is thick and earthy, piquant with peppered meaty flavours as well as lots of toffee pudding and honey, giving the beer a rich round underbelly over which the hops are orange marmalade and sherbet lemons, hedgerow shrubbery and just a hit of aniseed.
This is just brilliant. 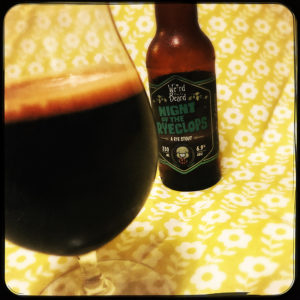 Night Of The Ryeclops (6.9%)
Put on your favourite horror movie, get comfy on the sofa and slip into Night Of The Ryeclops, a rye based Stout that’ll have you foaming at the mouth.
You see, what that wonderful rye does here is to pull the beer down into a dark and bloody underworld where meat juices mingle with chocolate orange and the black black coffee.
And yes, I meant to say black twice.
Sniffing the beer is enough to make your nostrils fold inwards as the aroma of roast nuts and spiced bitter chocolate hits with a desert dryness that you know is going to grab you by the throat when you take a sip.
But you have to take a sip.
And so you do, and that brittle bitter bone dry monster that you feared was lurking jumps right out with a loud and boisterous “boo!”
There’s chocolate and espresso, brown bread and treacle tart, toffee and tacos and a rich red beefiness that brings to mind a tannin heavy merlot as a red fruit builds up towards the brittle leaf litter and chestnut, hazel leaf and lemon rind of the hopping.
For me, this is the beer equivalent of that moment in American Werewolf In London where the boys have left The Slaughtered Lamb and accidentally lost the footpath.
Frighteningly fabulous.