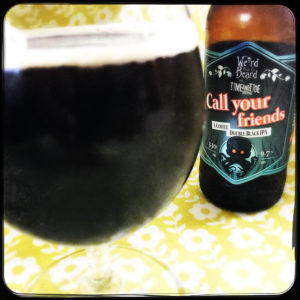 Help me, I may have peaked too soon.
It’s five twenty in the evening and I’ve decided to open a Coffee Double Black IPA brewed in collaboration with Time & Tide.
What madness is this?
I felt like I needed a pick me up and it just seemed like the right thing to do.
But now that I’ve taken a swig of this enormous brandy snap and plum jam, espresso and cinder toffee monster I fear I may have made a mistake.
Pouring inky black and stinking of fudge and honey, rum and molasses, the initial mouthful was a chest warming blast of boozy goodness.
The hopping is all fresh zingy lemon zest, metallic herbal leaves and a little chive, a blob of orange marmalade and a splat of sticky redwood resin, and the coffee bubbles away underneath, its rich woodiness adding an extra depth and zapping you between the eyes with a caffeine hit.
Now I’m totally wired, can’t you see?