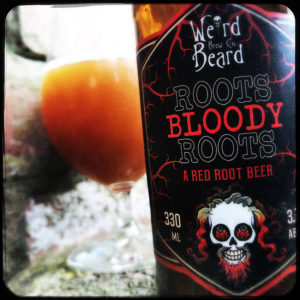 Boozy root beer anyone?
Don’t mind if I do, and this is a very nice little drink, at least once you get your head around what is happening in your mouth.
Don’t expect any beer flavours in here, though Roots Bloody Roots has a red ale at its heart, and there’s a little dash of English hops flitting around in the background just to add a little hedgerow pithiness to the end of the beer.
Brewed with Liquorice and Sarsaparilla root, Wintergreen and Vanilla, Roots Bloody Roots is by turns sweet and woody, earthy and dank, sugary and meaty, rich and warm.
It smells and tastes very much like a root beer, which is what it is trying to be, and I for one like it very much indeed.